Here are the challenges I’m focusing on in 2018. I will be updating this post as I read books and adding the reviews here too, so if you’d like to check out my Progress, come back to this post, which will be in the menu at the top of the blog. I will be adding more to this list, when I come across them and when I have more time. When I finish reading a book I’ll be linking the review here for each book, so if you click on the book cover it will take you to my review.

I find that it encourages me more than makes me feel pressured so I’m continuing with it this year. In 2016 I read 104 books, so this year I decided that I will try to read 250 books in 2018.

To help read some of the books I’ve hoarded, I’m going to be participating in this fun challenge that requires me to pick books off my physical bookshelf and those that already exist on my kindle. This is being hosted over at The Broken Spine. Erica has come up with a new Bingo board every quarter of the year. This board is good from January to March. I am hoping to complete this board by the end of March.

Written by an author of Colour – To All the Boys I’ve Loved Before by Jenny Han
A Book of Poetry – Leaves of Grass by Walt Whitman
A book you chose because of the Cover – Trust me, I’m Lying by Mary Elizabeth Summer
Female Main Character – Queen by Aimee Carter
A book Published in 2016 – Summer Days & Summer Nights, Edited by Stephanie Perkins

Book over 500 Pages – The Last Place by Michael Adams
YA Book – Summer & the City by Candace Bushnell
Sci-Fi/Fantasy – Percy Jackson and the Titan’s Curse
A Funny Book – Kiss Him, Not Me Volume 4
Book with a Name in the Title – Peter Pan

The Next Bingo Board is for April/May/June:

Less than 200 pages – Lot No. 249 by Arthur Conan Doyle
Book you saw someone reading – Shadow & Bone by Leigh Bardugo
Female Protagonist – Finale by Becca Fitzpatrick
Autobiography/Biography – A Father’s Story by Lionel Dahmer
Collection of Short Stories – All Out, Edited by Saundra Mitchell

Last year I started The Rory Gilmore Reading Challenge and this year I will be continuing this challenge. I’m not going to read all 339 books, so the books that I will be reading will be crossed out and in bold, the books I’m not interested in reading I’m just going to cross out. So, below I’ll put down the books that I’m yet to read. If you’d like to check out the full list, check out my 2017 Reading Challenges!

1. 1984 by George Orwell*
2. Adventures of Huckleberry Finn by Mark Twain*
4. The Amazing Adventures of Kavalier & Clay by Michael Chabon
5. An American Tragedy by Theodore Dreiser
6. Angela’s Ashes by Frank McCourt
7. Anna Karenina by Leo Tolstoy*
8. The Diary of a Young Girl by Anne Frank*
9. The Archidamian War by Donald Kagan
10. The Art of Fiction by Henry James
11. The Art of War by Sun Tzu
12. As I Lay Dying by William Faulkner*
13. Atonement by Ian McEwan
14. Autobiography of a Face by Lucy Grealy
15. The Awakening by Kate Chopin
19. Bel Canto by Ann Patchett
20. The Bell Jar by Sylvia Plath*
21. Beloved by Toni Morrison*
22. Beowulf: A New Verse Translation by Seamus Heaney
23. The Bhagava Gita
26. A Bolt from the Blue and Other Essays by Mary McCarthy
27. Brave New World by Aldous Huxley*
28. Brick Lane by Monica Ali
29. Bridgadoon by Alan Jay Lerner
30. Candide by Voltaire
31. The Canterbury Tales by Chaucer
33. Catch-22 by Joseph Heller
34. The Catcher in the Rye by J. D. Salinger*
36. The Children’s Hour by Lillian Hellman
37. Christine by Stephen King*
39. A Clockwork Orange by Anthony Burgess*
40. The Code of the Woosters by P.G. Wodehouse
41. The Collected Stories by Eudora Welty
42. A Comedy of Errors by William Shakespeare
43. Complete Novels by Dawn Powell
44. The Complete Poems by Anne Sexton
45. Complete Stories by Dorothy Parker*
46. A Confederacy of Dunces by John Kennedy Toole
47. The Count of Monte Cristo by Alexandre Dumas*
48. Cousin Bette by Honore de Balzac
49. Crime and Punishment by Fyodor Dostoevsky*
50. The Crimson Petal and the White by Michel Faber
51. The Crucible by Arthur Miller
52. Cujo by Stephen King*
54. Daughter of Fortune by Isabel Allende
55. David and Lisa by Dr Theodore Issac Rubin M.D
56. David Copperfield by Charles Dickens*
57. The Da Vinci -Code by Dan Brown*
58. Dead Souls by Nikolai Gogol
59. Demons by Fyodor Dostoyevsky
60. Death of a Salesman by Arthur Miller
61. Deenie by Judy Blume
62. The Devil in the White City: Murder, Magic, and Madness at the Fair that Changed America by Erik Larson
63. The Dirt: Confessions of the World’s Most Notorious Rock Band by Tommy Lee, Vince Neil, Mick Mars and Nikki Sixx
64. The Divine Comedy by Dante
65. The Divine Secrets of the Ya-Ya Sisterhood by Rebecca Wells
66. Don Quixote by Cervantes*
67. Driving Miss Daisy by Alfred Uhrv
68. Dr. Jekyll & Mr. Hyde by Robert Louis Stevenson*
70. Eleanor Roosevelt by Blanche Wiesen Cook
71. The Electric Kool-Aid Acid Test by Tom Wolfe
72. Ella Minnow Pea: A Novel in Letters by Mark Dunn
73. Eloise by Kay Thompson
74. Emily the Strange by Roger Reger*
75. Emma by Jane Austen*
76. Empire Falls by Richard Russo
77. Encyclopedia Brown: Boy Detective by Donald J. Sobol
78. Ethan Frome by Edith Wharton
79. Ethics by Spinoza
80. Europe through the Back Door, 2003 by Rick Steves
81. Eva Luna by Isabel Allende
82. Everything Is Illuminated by Jonathan Safran Foer
83. Extravagance by Gary Krist
84. Fahrenheit 451 by Ray Bradbury
85. Fahrenheit 9/11 by Michael Moore
86. The Fall of the Athenian Empire by Donald Kagan
87. Fat Land: How Americans Became the Fattest People in the World by Greg Critser
88. Fear and Loathing in Las Vegas by Hunter S. Thompson
89. The Fellowship of the Ring by J. R. R. Tolkien*
90. Fiddler on the Roof by Joseph Stein*
91. The Five People You Meet in Heaven by Mitch Albom
92. Finnegan’s Wake by James Joyce
93. Fletch by Gregory McDonald
94. Flowers for Algernon by Daniel Keyes
95. The Fortress of Solitude by Jonathan Lethem
96. The Fountainhead by Ayn Rand
97. Frankenstein by Mary Shelley
98. Franny and Zooey by J. D. Salinger
100. Galapagos by Kurt Vonnegut101. Gender Trouble by Judith Butler
102. George W. Bushism: The Slate Book of the Accidental Wit and Wisdom of our 43rd President by Jacob Weisberg
103. Gidget by Fredrick Kohner
104. Girl, Interrupted by Susanna Kaysen*
106. The Godfather: Book 1 by Mario Puzo
107. The God of Small Things by Arundhati Roy
108. Goldilocks and the Three Bears by Alvin Granowsky*
109. Gone with the Wind by Margaret Mitchell*
110. The Good Soldier by Ford Maddox Ford
112. The Graduate by Charles Webb
113. The Grapes of Wrath by John Steinbeck*
115. Great Expectations by Charles Dickens*
116. The Group by Mary McCarthy
117. Hamlet by William Shakespeare*
120. A Heartbreaking Work of Staggering Genius by Dave Eggers
121. Heart of Darkness by Joseph Conrad
122. Helter Skelter: The True Story of the Manson Murders by Vincent Bugliosi and Curt Gentry
123. Henry IV, part I by William Shakespeare
124. Henry IV, part II by William Shakespeare
125. Henry V by William Shakespeare
126. High Fidelity by Nick Hornby
127. The History of the Decline and Fall of the Roman Empire by Edward Gibbon
128. Holidays on Ice: Stories by David Sedaris
129. The Holy Barbarians by Lawrence Lipton
130. House of Sand and Fog by Andre Dubus III
131. The House of the Spirits by Isabel Allende
132. How to Breathe Underwater by Julie Orringer
134. How the Light Gets In by M. J. Hyland
135. Howl by Allen Ginsberg*
136. The Hunchback of Notre Dame by Victor Hugo*
137. The Iliad by Homer
138. I’m With the Band by Pamela des Barres
139. In Cold Blood by Truman Capote
140. Inferno by Dante
141. Inherit the Wind by Jerome Lawrence and Robert E. Lee
142. Iron Weed by William J. Kennedy
144. Jane Eyre by Charlotte Bronte – Currently Reading
145. The Joy Luck Club by Amy Tan
146. Julius Caesar by William Shakespeare
147. The Jumping Frog by Mark Twain
148. The Jungle by Upton Sinclair
149. Just a Couple of Days by Tony Vigorito
150. The Kitchen Boy: A Novel of the Last Tsar by Robert Alexander
151. Kitchen Confidential: Adventures in the Culinary Underbelly by Anthony Bourdain
152. The Kite Runner by Khaled Hosseini*
153. Lady Chatterleys’ Lover by D. H. Lawrence
154. The Last Empire: Essays 1992-2000 by Gore Vidal

I’m going to join the 11th Annual Graphic Novel & Manga reading challenge for this year, too, with the goal of Golden Age. The challenge has moved to a Facebook page.

What counts: graphic novels, collected trade editions, manga, comic strip collections, comic books or combinations of text and bubbles all in the same book. In print or digital. Anything else you feel is suitable.

My Goal is KANGAROO

This reading challenge is hosted by Booklover Book Reviews. The objective of this challenge is to showcase the quality and diversity of the books being produced by Australian authors. I will be adding every book I will finish here with a link to it’s review.

4 Authors New to me

This challenge is meant to help you get through some past-due review copies that’ve been neglected. Books must be at least 4 months past due. I’ll be trying for 20 Review Books.

This Challenge is being hosted by Amy @ Passages to the Past. In this Challenges, the goal is to indulge in some historical Fiction in any Subgenre. I am going to meet the “Renaissance Reader” level again to this year, 10 books!

The Author Love Challenge 2018 is hosted by Berls @ Fantasy is More Fun and Michelle @ Because Reading is better than real life.  #authorluv18

The goal of this challenge is to pick an author you love and would like to read more of, and try to read as many books by them in a year as you can. I’ve chosen Garth Nix for my author, and I’m setting my goal to at least 10 books.

The Levels For 2018 Audiobooks Challenge

My Goal: is going is to complete the Socially Awkward Level. You can find the audiobooks I’ve listened to down below.

The 2018 Finishing Series Reading Challenge is exactly as it says it is: a year-long challenge dedicated to finishing series that you have started prior to the start of 2018. I am going to keep a list here of all the books in the series I need to read, and come back once I finish them to mark them as read.

I am going to aim to read 50 books for The Backlist Reader Challenge. I have a few books in mind for the challenge, but mostly I just like to read whatever I feel like reading at the moment. I’m trying to read all of the books that I own and read fewer from the library this year, and I think this challenge will help me with that.

To count for the challenge, books have to be published before 2017 AND already be on your TBR list or pile. In other words, you don’t have to own it. If it was on your list to read before you signed up for the challenge, and it came out before 2017, it counts. Library books, books you picked up at a yard sale, books you borrowed from a friend, ebooks, print books, audiobooks—any book counts as long as it fits those two criteria.

Because I’m a glutton for punishment and still desperately trying to read more diversely, I am joining the Platypire’s in the Platypire Diversity Challenge. Now this challenge kind of sucks for me because it requires that I read certain types of diverse books in specific months, and I suck at that. You can find out more information about what is being featured and sign up to join the challenge here. 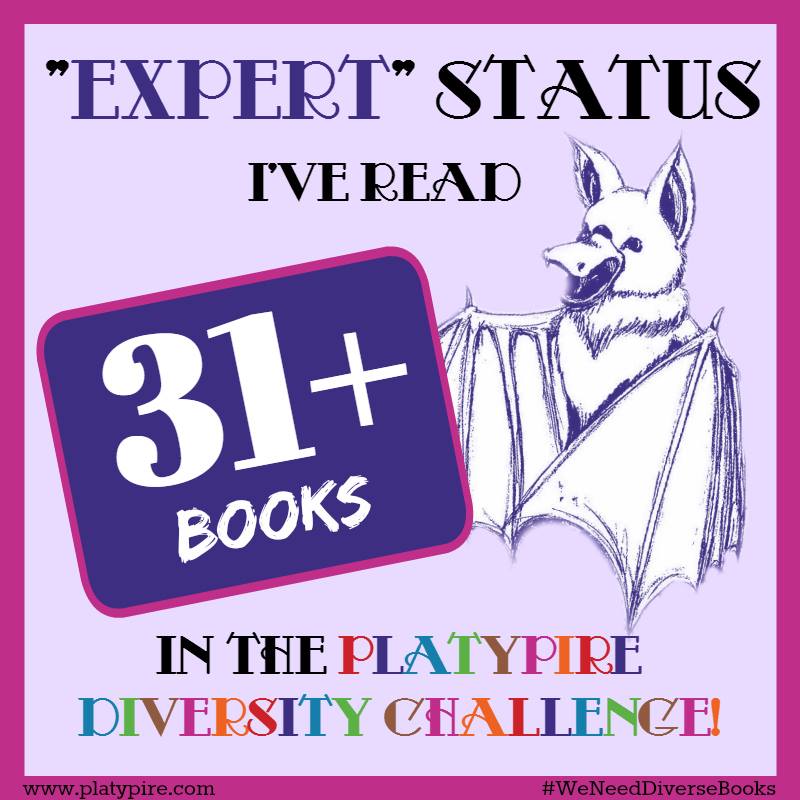