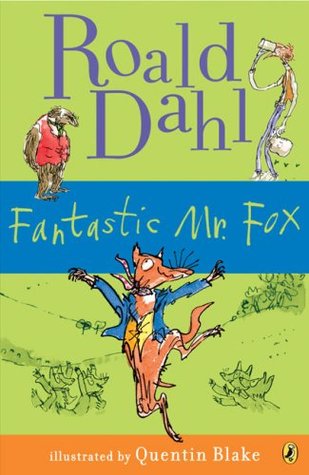 Someone’s been stealing from the three meanest farmers around, and they know the identity of the thief-it’s Fantastic Mr. Fox! Working alone they could never catch hi; but now fat Boggis, squat Bunce, and skinny Bean have joined forces, and they have Mr. Fox and his family surrounded. What they don’t know is that they’re not dealing with just any fox-Mr. Fox would rather die than surrender. Only the most fantastic plan can save him now.

I have to admit I really didn’t care for this book. Don’t get me wrong, It’s not a terrible book, It’s written well. There’s nothing hideously wrong with it. But there wasn’t much right with it either. The simple fact was Mr. Fox was not, in fact, very fantastic.

There’s just that lack again that some of his books always seem to have: it’s different for each book but it’s always there and it’s always intangible. It has an obvious plot that isn’t much of a plot and it has characters that are whimsical but still a bit flat.

Nothing much happened in the story. It’s only mostly all about the foxes breaking into one storage after another and stealing food. What else is there to talk about after that, though? It’s not much of a story, not one I would go out of my way to read. The story is very simple and straightforward and it almost seemed a little bit too simple, lacking some humour and some more twists. It was a bit brutal for kindergarteners, but seemed too simple for older kids.

I also didn’t care much for the ending. It was far too easy, and I really felt the characters fell out of character in the end. Like I just explained with the farmers, they just sort of suddenly gave up digging to find the fox. And Mr. Fox just gave up on trying to get his family away from them by just thinking it’d be a good idea to stay down there.