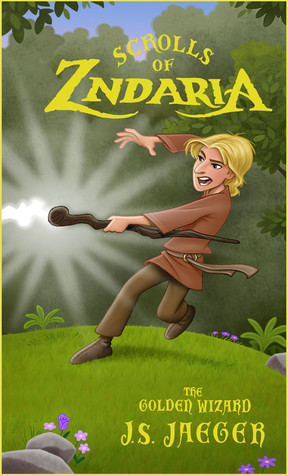 Join Nathanial “Nate” McGray, the fifteen-year-old son of the king’s woodsman, on an unforgettable adventure. He is determined to be the first peasant to become a wizard in the magical world of Zndaria. Wedged in a sticky spot, Nate is saved from the town bullies by a mysterious elf named Blinkly. Together, Nate and Blinkly embark on a journey to the Halls of Magic. Along the way, they encounter vicious Dread Vikings, deadly bounty hunters, and a deranged beast. Just as Nate begins to learn magic, the Infinite Wizard and a devilish army attack his kingdom. Will Nate become a wizard? Can he save his kingdom? The story unfolds in the Scrolls of Zndaria: Scroll One: The Golden Wizard.

I received a copy of The Golden Wizard from the author for review Consideration. This in no way influenced my opinion of this book.

The Golden wizard is the first book of The Scrolls of Zndaria series. It follows Nathanial “Nate” McGray, a peasant boy, who dreams of being a wizard, in his quest to become the first peasant wizard, with the help of a new friend. This is a fun fantasy story full of magic and adventure for younger readers. It is easy enough for younger kids to read and understand, but the plot was fun enough that older kids can read and enjoy it too. I found myself really enjoying this.

However, I was disappointed in a few things. It had an interesting storyline but was a little too fast paced at times. I would have appreciated more details on the creatures mentioned in this book. A little less variety in exchange for some more depth about a select few. Demon was a great character that I would have liked to have seen a little more involved in the story.

I also felt that the story had a relatively slow start, and then once the story got going, it suddenly jumped ahead leaving out some important details, it skipped all of his schooling and jumped ahead to when the war breaks out and he has to go fight, and with all of this  new-found magical talent that we didn’t know he had. It made it confusing and it felt at times very rushed. I would have liked more detail in some places, like with the halls of magic. Also, I adored the setting of Zndaria and I would have liked to see more world-building.

Although, It felt a bit rushed and it didn’t feel properly developed or completed. Aside from those issues, I really did enjoy this book, it is a fun and easy read. It has potential and very likable characters. And I would definitely like to carry on with the series.